Law enforcement rangers need to know where and when crime occurs to effectively design strategies for reducing poaching. Although crime is generally hard to measure, obtaining a representative sample is particularly challenging for wildlife crimes. The vast majority of wildlife crimes are probably never known to anyone other than the offenders involved in the crime. That is because the victims of wildlife crimes cannot inform the authorities about the offence, unlike most urban crime types like burglaries or violent crimes. Why is this a problem? Patrols in protected areas are unlikely to record all wildlife crimes, but often use the detected crimes as input to deployment decision models. If biased data is used, then this may not result in optimal ranger deployment.

Nick van Doormaal is a wildlife crime researcher and analyst at Transfrontier Africa, South Africa. His research centres on combining insights from criminology and wildlife ecology to understand poaching problems and conservation conflicts. ‘Most studies on poaching acknowledge the challenges of detecting wildlife crimes, but few have estimated baseline detection probabilities or explored different strategies that may lead to increased performance. In our study, we designed a field experiment to compare different search strategies for detecting illegal activities in Olifants West Nature Reserve, South Africa. Our focus was on detecting snares: a piece of wire set as a trap to catch animals like antelopes and warthogs. We randomly placed a large number of ‘fake’ snares to evaluate the different search strategies: spatially-focused patrols, patrols with independent observers, and systematic search patterns. Because the location of every fake snare was known, it was possible to calculate the proportion of detected snares and compare the detection probabilities among the different scenarios.’ 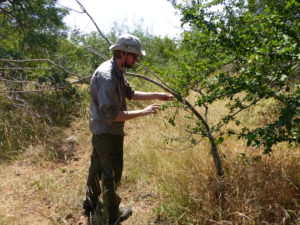 ‘At the end of our experiment, we found that most fake snares were never detected during the study period. This also highlights the threat behind actual poacher snares; even snares that were set several months ago can still be harmful to local wildlife. Although detection probabilities were generally low, most snares were detected when systematic search strategies were used. By systematically combing an area, patrol effort is more concentrated, whereas the effort of the other patrol strategies is more diffused. The trade-off is that it takes more time to eventually cover a particular area. A hybrid model in which systematic searches are combined with regular snare sweeps are potentially a balanced option in practice.
This research is a first step to better understand the detection probabilities of poacher snares for different patrol strategies. Our methodology can be repeated to other protected areas to obtain a baseline detection probability of snares and compare other patrol strategies.’

Take a look at the blog by Nick van Doormaal on Oryx the Journal.

Crossing borders: does it matter? Differences between sex traffickers, their victims and modus operandi